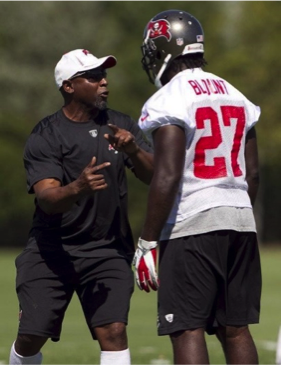 Blount was in Tampa when the team drafted Doug Martin. He was caught up with being done wrong when Doug came in. As a matter of fact he was bothered with the thought of any back being drafted. Doug had to earn the spot. It wasn’t just given to him by the team. Some of 27s play assisted in 22 becoming the starter. Check out my thoughts on this process.

New players earning respect has been done away with in regards to the old way of doing things. Fighting for your life was a way I use to look at my job or my starting position.

I remember having to actually fight for the respect of the players on the team. I remember, Eddie Johnson, challenging me because he was the tough head hunter on defense at the time. The “Georgia Assassin” was his nickname. “You not coming up in here young man.” I went right back up in there. That was where a bond, that would never be broken, got established. #fortheloveofthegame

I can remember the transition began to happen when I became the player development director/coach/scout..etc. It was 2003/04. The Ravens had drafted a brand new, polished up QB in the first round. (Kyle Boller) We had played a season, but he hadn’t made the cut to win the job.

We had a personnel meeting during the off-season, to discuss the team. One of the topics was the QB position and who would be named the starter. The thought from management and some of the other scouts was, we drafted this guy to be our QB so let’s make him the guy. I spoke up, crazily, that a competition should be had, thus making the young fellow win the job and earn the respect of the players. My thought regarding the subject hinged on the thought that competition makes everybody better. If the youngster was worth his salt, then he would win the job as opposed to it being silver spooned to him.

Coming up in a era where you had to win your starting job, no matter where you were drafted, served to build a different type of character for me.

The leadership of the team made you earn your way. Veteran players or guys that had the position, had a fighting chance. They could work the off-season to battle for the job. Competition within the team, made everybody better. The players on the team appreciated the jobs they had even more so because they did and had to win it.

Nowadays, when a guy is drafted in the first three rounds, he is almost automatically placed in a starting position. What does that have the potential to do with the other players mind? How are they to look at themselves and their new teammates?

To me that stands as a potential way of building animosity between players, not a healthy respect and appreciation. Character is definitely checked during these times. Even when the players are giving a chance at battling for the position, the inner man is challenged.

The salary cap has definitely made the process of building a team more delicate. Yes, it was delicate anyway. The intricacies of any “team” sport are layered with all types of challenges. The NFL has a few more.

I feel the old school ways still have a relevance in some aspects of the game. Building character, respect and understanding within the team is a continual process. Earning your job should continue to be part of that.