Game Within the Game 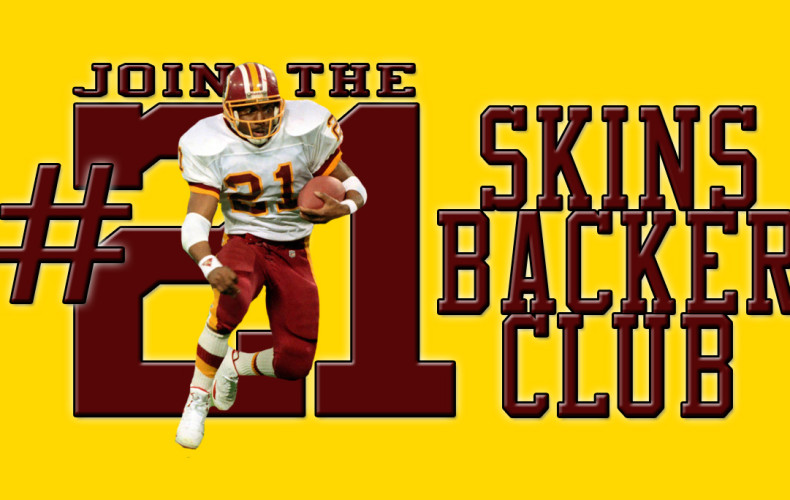 Game Within the Game

Even within a game there is a lost and there are some victories that happen. For the Redskins vs the Colts, the very first defensive play produced a win for the defense and a lost for the Colts offense.
In the first picture below it can be seen that Kerrigan has gotten off on the snap and is ready to attack Cherilus. Kerrigan has his hands up in a position to slap Cherilus’ down. Cherilus is already in trouble. Good basic pass protection starts with your hands up in a position ready to punch the defender. 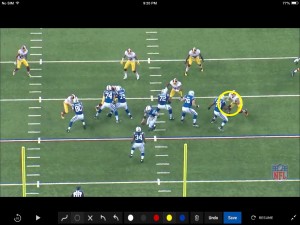 In the next picture I have circled the shoulders of both players. Kerrigan has slapped the right arm of the tackle and gotten his left shoulder past the right shoulder of Cherilus. Another sign of trouble. The next step for #91 is to work his swim move to get past. 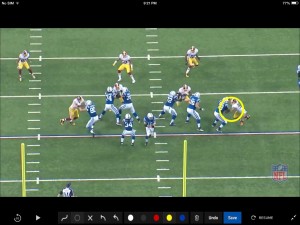 Ok…we can really see the trouble that Cherilus is in. Look at his feet. His feet are almost touching each other. You can see that the other pass protectors have their legs about shoulder width apart. Big trouble for the QB. WATCH OUT ANDREW! Kerrigan is ready to accelerate to his sack. 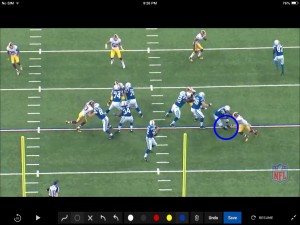 Got ya! You can see that Kerrigan has left the tackle behind. Cherilus has tried to cut the rusher in shear desperation. A last ditch effort to slow down the pass rush. Futile!…especially with the type of technique displayed.

The sack/fumble is made and the ball is out. It’s circled in yellow or Gold and ready to be pounced on. 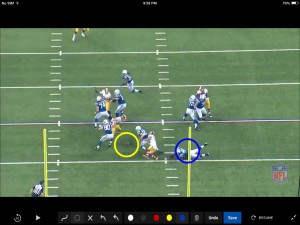 The Game within the Game “win” for the Redskins has gotten the team exactly what it needed to start the game, especially in a hostile environment. The next step is to get the offense to punch this thing in.