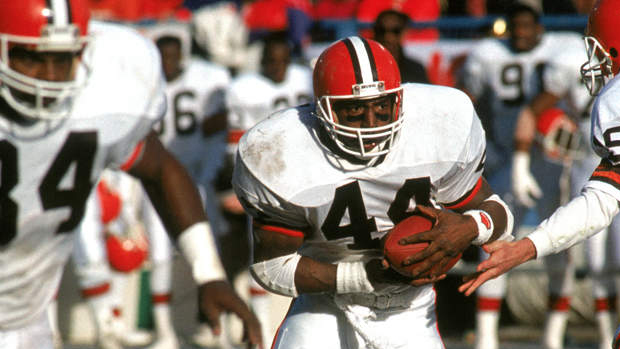 They never lose hope. They never die. They always encourage their players. It can be football, basketball or baseball. It matters not to the fateful and loyal fans of Cleveland.

I had a connection to Cleveland/Believeland before I was summoned there by the game that I grew to and still love.

I was drafted by the Cleveland Browns in the 10th round of the 1984 NFL draft. It was actually the end of the 10th and almost the 11th round. I get the call after two long days of waiting by the phone, alone on the second floor of Belk Hall on ECU’s campus. There was no TV, radio or video games to pass the time. It was just me and the phone.

The first voice I heard was Art Modell. He welcomed me then handed the phone to Sam Rutigliano. He did the same. I had a good feeling when I spoke to both.

I can’t say I was excited, but I can say I was pleased to be drafted because I was assured of a signing bonus. I search the memory bank and find the first time I tasted Cleveland.

I was in mine and my oldest brother’s room at Granny’s house watching football. It so happened that the Browns were on. It stood out to me because the Pruitts made some plays. Greg broke off one of his tear away punt returns and Mike showed some quickness and power while getting a much needed first down. It felt like some type of indicator to me. It registered and as I normally did, went on outside to play some. Later in my life, I would end up on the same team, in the same meeting room and blocking for Mike. That moment at Granny’s house comes to mind.

When I got to Cleveland, I did not understand the type of history in sports I was surrounded by and walking into. However, I found out quickly what type of weather I was going to be dealing with. As I stepped off the plane, sleet and wind hit my ass in the face. I was also hit in the face with some of the grand history that weekend by the Browns. They had a meet and greet with some of the “Past Greats.” It was a pleasure to meet Lou Groza and others. The more you are around the Browns, the more you understand the tradition that exist. The more you are around, the more you understand the connection that the players and the fans have.

I started to get a feel for what that felt like myself. My family and I stayed around after the season. We learned that on some type of winter days it was everyman for him/herself. That meant I was getting out of the car and there was no waiting or opening doors. I’m gone and you get there as best you can. During those times we bought Cleveland Cav season tickets.

I recognized that we had become fans when after we left a game, in which they had lost, I felt like I had lost. Well dam! Why is that? It gave firsthand knowledge and understanding regarding how Cleveland fans felt after we lost a game. It’s we won or we lost. It’s real ownership and real kinship of and to the team.

The new ESPN 30 for 30 movie “Believeland” does a hell of a job connecting the grand history of the Cleveland culture while intertwining the grand history of Cleveland Sports. You see, they are one and the same. Some of the stories that I heard about Cleveland I totally disregarded. I disregarded them because I lived there and stayed there after the seasons were over. My oldest daughters started their early schooling there. We made Cleveland our home and found nothing lacking.

While I was living there, I knew that the city had a incredible energy about it. That energy I felt when attending some of the play-off games of the Indians. I felt it first hand when we were on our run of playoff appearances from 1985-88. During those times, I felt jolts of energy when I just went out to walk the neighborhood. It was so real, I decided during some of those times to not venture to the malls or go to stores. I would stay close to home. I learned to capture that energy and direct it into my practices, then ultimately into the games.

The connection with the fans and excitement associated with each team provided a fabulous vibration. It created a tremendous bond that transcends the passing of time and shows a devotion that is like no other.